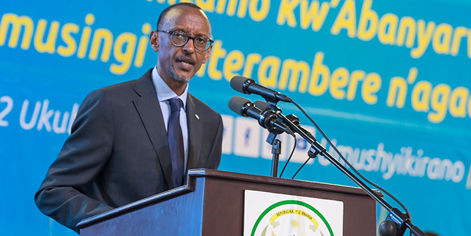 President Paul Kagame has praised Rwandans for strengthening Rwanda’s democracy, over the last two decades, by defining themselves and refusing to be distracted. The President who was officially opening the 13th National Dialogue Council and delivering the State of the Nation address reiterated the need for government activities to be guided by what Rwandans express.

Commonly known as ‘Umushyikirano’, this year’s National Dialogue Council is held under the theme “Rwandans’ Choices – Foundation of National Development and Dignity.”

In his address, President Kagame pointed out that what Rwanda has become is more than what anyone dared expect 21 years ago.

“We know its value, and We the People, as it says in our Constitution, are prepared to safeguard the unique choices and actions that brought this country back to life. We will always want to stay together, we will always be accountable to ourselves first, and we are not going to stop thinking big,” the President remarked.

President Kagame further stressed that it is a privilege and a duty to serve Rwanda, not an entitlement. He added that no individual is there forever, and that there is no term limit on values, institutions, and progress:

“When the time comes to transfer responsibility from one public servant to another, Rwandans already have confidence that it will be done in the orderly and harmonious manner which we expect and indeed require.”

There is even better Rwanda ahead, the President said, adding that the chance for Rwandans to definitively transform their country must not be squandered through inaction, indecisiveness, or mismanagement.

He recalled that when young Rwandans from refugee camps decided to liberate the country two and a half decades ago, their aim was to ensure that the next generation would not have to go through similar hardships: “This is the future we always wanted for our children. They take the normality of the new Rwanda for granted, and that is okay.”

The President reminded Rwandans that they don’t have to change who they are – they have to be their best selves:

“A person without a country has no value. A country without values has no future. Our vision for the future is not technical; it is deeply meaningful to us, reflecting how we feel in our hearts about each other, and our homeland.”

President Kagame stressed that although criticism can come with some benefits, but statements which depict Rwandans as people incapable of owning their lives are deliberately abusive. He reaffirmed that in the not-too-distant future, Rwanda will be a prosperous nation, not riding on the backs of others, but cooperating on the basis of their abilities, knowledge, and desire to succeed.

The President concluded that Rwandans are a free and decent people; who chose to stay together, be accountable to each other and think big towards the future they deserve.

Provided for by the Constitution, the National Dialogue Council is a Rwandan home grown initiative which offers a forum where the President, along with national leaders and citizens debate issues pertaining to the state of the nation, the state of local government and national unity.

This year’s Dialogue brings together over 1,000 participants including representatives from local government entities, faith-based organisations, diplomats, and Rwandans from the Diaspora.